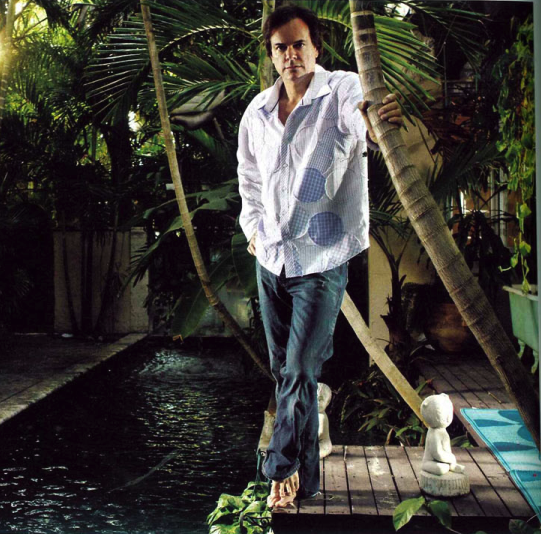 Brian Antoni is a descendant of the second oldest family in the Caribbean, an aristocratic dynasty whose multi-ethnic roots stretch from the southernmost island of Trinidad, to the northernmost island, Grand Bahamas. His family tree includes French Creole sugar planation owners, utopians, pirates, oil tycoons and now a new generation of cutting edge creative artists and thinkers.

When Brian was a year old, his parents moved from Trinidad to Freeport, Bahamas- buying into the vision of a multi-millionaire ex-convict who dreamed of building a society free of taxes. Brian remembers seeing the roads and buildings carved out of the wilderness. His father was the first doctor in the Northern Bahamas, receiving payment in the form of fruits, vegetables and fish. In the early years of Freeport, he also acted as the vet. When Freeport became an international destination, he went on to become a renowned plastic surgeon and established a clinic known as “Doc Robert’s Famous Black and White Clinic,” a celebrated institution on the island. Everything in the clinic- right down to the designer sheets on the operating table- was in black and white. Everyone from taxi drivers to royalty from all over the world came dressed in black and white to sit in the clinic and socialize. Brian’s mother, one of the pioneer real estate developers of Freeport, built and ran the electric company for the western portion of the island. On the twenty-fifth anniversary of independence of the Bahamas, Brian’s father was declared a National Hero in a celebration at the Government house in Nassau, for bringing medicine to the Northern Bahamas. Before him, as the Governor said, the sick in the Northern Bahamas had to sail for days to reach a doctor.

Brian’s sister and brother are accomplished artists. “I have a sister who chews and spits out chocolate and lard and a brother who writes in monkey language and my parents hang in drag museums all over the world.” He credits their courage in pursuing their art for showing him the way to follow his own passion for writing.

Brian’s sister, Janine, won a MacArthur Genius Award and is one of the most acclaimed conceptual artists in the world today. She has worked in many mediums including chocolate and lard. Her piece, Gnaw, which is in the permanent collection of MOMA, was created through the pain-staking process of gnawing at giant cubes of chocolate and lard, and then re-casting the spit-up residue into chocolate hearts and lipsticks. She also turned her mother into her father and her father into her mother with wigs and theatrical make-up in a photographic work called Mom and Dad.

Brian went to Mary Star of the Sea Elementary school in Freeport and graduated from Pine Crest High School in Ft. Lauderdale. He attended Emory University, majoring in history and graduating with honors. He spent a year studying at the University of Madrid and then went to Georgetown Law School where he was on the dean’s list and received a Juris Doctorate. After passing the Florida bar, he studied British law at Kings College, University of London and then studied advanced International law at the Salzburg University School of Law, within the Austro-American Institute of Education. Brian then went to work as a James Dana Fellow for the European Economic Community in Brussels, where he assisted in development projects for African, Caribbean and Pacific nations. Eventually, Brian left the E.E.C. and returned to the Bahamas to run the family business. While there he wrote his first novel, Paradise Overdose (Simon & Schuster, November 1994) in which he spun a dramatic and compelling tale of love and friendship and corruption, which drew from his own family’s exotic life.

Twenty years ago, Brian Antoni moved to South Beach, following his family’s tradition of being a pioneering settler. He bought and renovated a run down Art Deco apartment building named The Venus De Milo Arms and an exotic 1930’s home, which he named “Chateaubrian.” Brian’s home contains a brilliantly edited collection of high and low art, furniture and objects that evoke the energy of the South Beach Renaissance- when eccentric pioneers ran amok but were still outnumbered by old Jewish retirees. Antoni’s home captures that raw inspired moment when cultures were clashing for the first time, and features an Alligator Wrestling road sign (hurricane Andrew debris), works from several generations of Miami artists, a statue of a headless woman made from the remains of demolished deco buildings, a fountain with his own face coming out of a mirror and spiting water into a pool, and seashells and ocean flotsam that his father, Dr. Robert, has glue-gunned to create entire walls. This is all amidst the priceless modern furniture he collects, and a yard that is a full on tropical (bring a machete) jungle. Much like his father’s famous Black and White clinic, Brian’s home became the scene of many sociocultural gatherings and celebrations. Everyone attended Brian’s parties, from neighborhood folk, Cuban refugees, drag queens, and senior citizens to celebrity guests (Timothy Leary, Bianca Jagger, George Plimpton, Zaha Hadid, Anselm Keiffer, Stephen King, Candice Bushnell, Oliver Stone, Betty Friedan, Kurt Vonnegut, Derek Walcott, P.J. O’Rourke, Gianni Versace, John Berent, Calvin Trilion, Mario Batali, Cameron Diaz, Joey Stefano, Joey Arias, Ellen Barkin, Marissa Tomei, Michael Stipe, Bernadette Peters). “Chateaubrian” has been featured in magazines, television shows, and in many table-top books, including Tashen’s Miami Interiors, along with South Beach Style, Outdoor Living Room and Garden Ornamentation.

Brian Antoni spent the last twenty years researching South Beach: The Novel, working – at times — as a doorman and bathroom attendant at South Beach’s hippest clubs. He traveled illegally to Cuba to study the plight of refugees, interviewed numerous Holocaust survivors and visited Auswitch. To learn about the fashion business, he rented his house out for photo shoots. Bruce Weber shot part of an infamous Abercrombie and Fitch catalog at his house, i na  photo story entitled “Can You Find Love in a House of Lust?”   Helmut Newton shot porn star Vanessa Del Rio in his Florida Room in an advertisement for Taschen Books.

Brian became a contributing writer to Ocean Drive Magazine and was Editor-at-Large of the Miami Herald’s Home & Design Magazine. Brian also wrote about Miami, along with Carl Hiaasen, Dave Barry, Elmore Leonard and other authors, in the New York Times bestselling serial novel, Naked Came the Manatee. All proceeds from the novel were donated to charity.