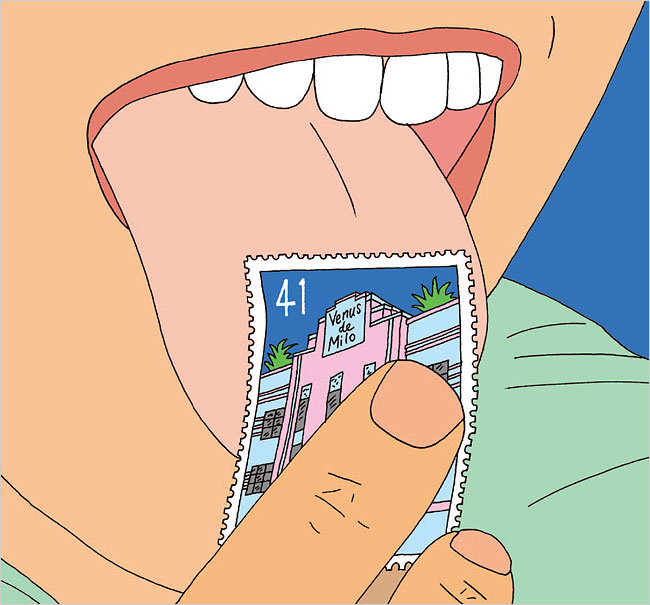 By HENRY ALFORD
Published: March 9, 2008
Many are the sparkly charms of the opera. The live camels, the castrati. The preoccupation with the world’s oldest profession. The implication that narrative gathers its force from the combined efforts of caterwauling and wig tape. The plots that are not unleavened by coincidence and melodrama. The assertion that overweight people, when dying, brim over with song.

“South Beach: The Novel,” Brian Antoni’s candy-colored and warmhearted second work of fiction, would make a terrific opera. Though “South Beach” isn’t camp — it lurks in the wings thereof, its bejeweled turban only slightly askew — it revels in a kind of surface detail that might easily be mistaken for it. Rich with club scenes and descriptions of offbeat forms of physical congress, this story of one man’s moral and sexual flowering might best be described as an arrested bildungsroman with a predilection for the psycho-sexual; indeed, this is likely to be the only book written this year to contain the sentence: “He licked and he licked and he licked as he thought, This is where I belong.”

Handsome, 29-year-old Gabriel Tucker is a responsibility-free heterosexual trust-funder and orphan. When his uncle commits suicide, Gabriel suddenly finds himself penniless except for his interest in a lovely old Miami Beach apartment building called the Venus de Milo Arms. Gabriel moves into the money pit, where he fights off the advances of speculators and the wrecking ball. Concurrently, the heretofore feckless hottie is swept up in the emotional vortex of the building’s residents and hangers-on: Marina, a MacArthur genius-grant-awarded artist who doles out to Gabriel generous amounts of hot-and-cold; Miss Levy, a Holocaust survivor who dresses in English mod go-go tights and keeps cans of tuna and stolen packets of sugar under her bed “just in case”; Pandora, a mute transvestite desperate for money for her sexual reassignment surgery; Skip, a gossip columnist with AIDS who refers to fashion models as “garnish” and “parsley”; and Jesus, a Cuban hustler who will wash ashore on a raft, only to be rescued by the famous fashion designer Salvatore Fabrizio, a Gianni Versace stand-in who, before turning Jesus into an overnight modeling sensation, will cleanse the refugee’s sunburned face with Pellegrino in his chauffeured limo.

If Antoni’s characters suggest an effort to portray one of each of Miami’s demographic sectors — artist, check; Cuban refugee, check; person with AIDS, check; old duffer, check — that is because he means the book to encapsulate the social makeup of a city he clearly loves: “Miami Beach had been the place where neon went to die and now it had become the place where neon went to be born again. Miami Beach had been a place where old people came to die, and now the young also came to die, from AIDS. It had also become a place where all ages came to be reborn, to remake themselves. In Miami Beach there was a feeling that you could be whatever you wanted to be.” In other words, this is “South Beach: The Novel,” not “South Beach: A Novel.”

What saves this schematic approach from sinking the book is the author’s vivid imagination. Two of the art happenings that Marina stages in an abandoned swimming pool behind the Venus are very memorable, as are scenes of sexual humiliation involving house paint and chocolate. You can’t fault this author for not going far enough — this is, after all, a book in which the prize awarded at one restaurant’s monthly raffle is the removal of a concentration camp tattoo. And yet you often wish that he had put as much effort into his plotting as he did into some of the individual scenes. It’s one thing to have both Gabriel and Jesus as passive recipients of their initial good fortunes, but quite another to see Jesus’ drug problem and Skip’s writing block magically whisked away at novel’s end.

Antoni — who, publicity materials tell us, himself restored an Art Deco property in South Beach “and was immediately acclaimed for his social soirees … that brought everyone from neighborhood folk, Cuban refugees, drag queens and senior citizens to celebrity guests Cameron Diaz, Gianni Versace, Stephen King, Bianca Jagger, Candace Bushnell … and more over to party” — ends his book with a nearly 11-page list of dedicatees. I’ve made it only through the first page and have already encountered Gloria Estefan, George Plimpton, Maida Heatter, Cher, Calvin Klein, Oribe, Martha Stewart and Prince. This opera has a cast of thousands; let’s hope there’ll be enough headdresses to go around.

Henry Alford is the author of “Big Kiss” and “Municipal Bondage.”

link to the article on nytimes.com