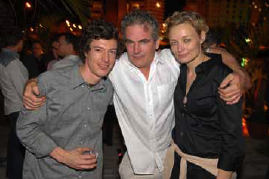 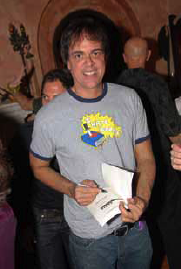 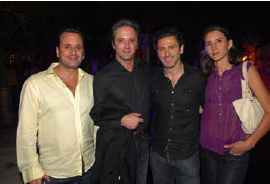 Guests were greeted by Books & Books representatives who were selling copies of Antoni’s novel. While sipping margaritas made from Partida Tequila and cocktails by Alchemy Vodka around the poolside dock, guests enjoyed a fireworks display produced by artist Robert Chambers. Antoni’s sister and wellknown conceptual artist Janine Antoni, who won the MacArthur Genius Award, showcased video art of her walking on water, along with a showcase by Dara Friedman, artist and filmmaker, whose work has appeared in the Whitney Museum of American Art and the Museum of Modern Art, who also screened a surreal movie shot at one of Brian Antoni’s parties 15 years ago, along with video art of early South Beach Art Deco design. 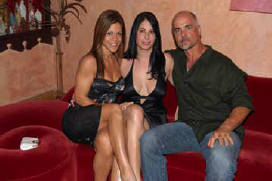 Singer and songwriter, Stephanie Lallouz, a close friend of Brian’s, closed the evening with a folk song that she had written especially for Brian entitled, “Brian’s Song,” which represented scenes from early South Beach and included lines from the novel.When asked how this book party compared to others he had hosted in the past, Antoni commented, “At least, everyone kept their clothes on this time, unlike my last party where Candace Bushnell stripped and jumped in the pool, a very South Beach Sex and the City meets Lipstick Jungle moment.”