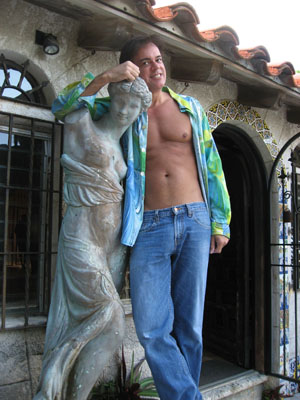 South Beach: The Novel author’s home is an homage to Miami Beach

Long before it became SoBe, it was Miami Beach—home to Jewish people and Jackie Gleason, where legions of bathing beauties frolicked, where Coppertone and coconuts perfumed the tropical breezes—or so the advertising goes. For a while, everyone who was anyone spent time in Miami Beach, including Miss Universe. The famous pageant was held at the then named Miami Beach Auditorium from 1960 to 1971. Miss Germany won the title in 1961. Miss Thailand garnered the heavily bejeweled crown in 1965.

In those early G-rated days, Miss Universe winners cast their hands, feet and signatures in Hollywood, California-style Walk of Fame stepping stones. If there were written records or photographs, they are impossible to find. The cement discs went unnoticed for years, artifacts all but lost to the past, until salvaged by writer, Brian Antoni, author of a naughty but charming book about South Beach set in the velvet-roped ‘90s.

“A friend of mine found Miss Germany in a dumpster and rode it on his bicycle to my house,” said the author. “Then I rushed back to the dumpster and found Miss Thailand. I don’t know where all the others went. It’s wrong. These are pieces of Florida history. I don’t understand how anyone could just throw this away.” 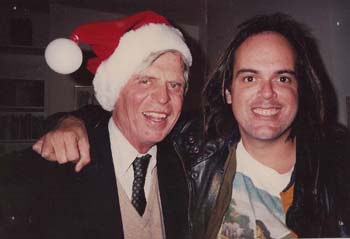 Brian Antoni is known locally for his witty writing, lavish social soirees, and celebrity companeros. His new book, South Beach: The Novel is an entertaining adult fairy tale and family saga that captures South Beach when it was the world’s number one sensual destination.

Recently, the globe-trotting Antoni agreed to an interview at his Miami home where he shared insights into why he preserves pop culture, bad art, and stories.

Antoni’s home is itself a tribute to Florida kitsch and folklore. First, there is an old black and white picture of the house from the 1930s. It’s a simple Florida bungalow, nothing like the eccentric property of today. These days the home is part haute couture and part Versace’s basement; objects old and new all have a narrative. 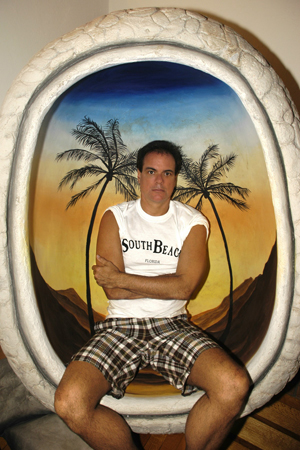 Antoni’s dining room is called the Bad Portrait Room. To qualify, portraits must be old, badly painted, and cost under $20. The Florida Room contains a Formica coffee table cut in the shape of Trinidad, where his family is originally from. Chandeliers of uncounted quantity and mixed-media materials hang like holiday ornaments inside and outside the house—the largest is gripped by a hand and suspended above the outdoor pool.

“Whenever I see one, I buy it,” Antoni said.

There are nightclub signs salvaged after Hurricane Andrew in 1992. The Miss Universe footstones are near the front door, guarded by a suit of armor the author owns.

“This house is nothing like my place in New York,” Antoni says. There’s a smile on his face. This house is a playground. He continues a tour though a hallway, its walls are decorated with real seashells. “I suppose my itch for collecting started when I was a kid, salvaging shells on the beach in the Bahamas where I grew up. I’ve collected things ever since.”

Something else Antoni collected off the beach was author, and founder of The Paris Review, George Plimpton. They met walking there one day many years ago. To an aspiring writer, a valuable find indeed. The two, and Plimpton’s wife, became fast friends. Plimpton, ever the discerning taste-maker, upon hearing Antoni’s remarkable SoBe tales, encouraged him as a writer. Plimpton nagged like a father, “Brian…I hope you’re writing all of this down.” 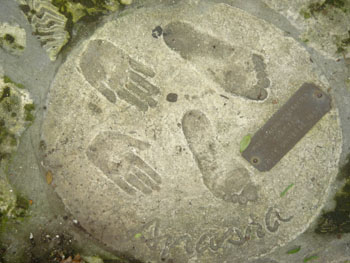 “I hate writing, so I do it in spurts,” he said. “The best thing about writing is that it gives you an excuse to do a lot of things, bad and good. That’s number one. Number two: you observe more, and you feel more.”

To research South Beach, Antoni said he carried a notepad with him when he went out at night.

“I knew I was writing this book. So, I would leave a club, find a bright streetlight, and write everything down that I heard. I didn’t want anyone to know I was doing it. They wouldn’t have liked it at the time. But they’re sure glad I did.”

South Beach: The Novel tells the story of Gabriel Tucker, a 26-year-old trust-funded traveler who suddenly finds himself broke. He journeys to Miami Beach, to the one thing he’s inherited, a decrepit apartment building called the Venus De Milo Arms. There, he is embraced by a cast of outrageous characters: Jesus, a Cuban refugee craving fame; a flamboyant Italian designer named Fabrizio, who helps Jesus for a price; Miss Levy, a Holocaust survivor with a golden key; a masochistic gossip columnist named Skip; Y-to-X wanna be, Pandora; and Marina, the performance artist with whom Gabriel falls in love. Amidst the romance and ecstasy-fueled orbit of South Beach, Gabriel manages to save the Venus and other Art Deco gems from callous developers.

The story is quirky, insightful and engaging. Even quirkier is the book’s exhaustive list of acknowledgements—20-pages of un-alphabetized names. 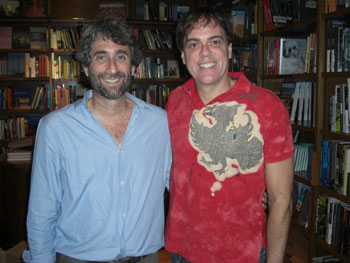 “Thanking everyone was my way of making sure that none of the people who lived during those times were forgotten,” he said. “I guess you could say it’s a memorial to them, like a wall where names are inscribed.”

So who are the characters in Antoni’s book exactly? Antoni says the characters in the book are composites, but many are recognizable, and nobody’s angry about it. Conversations are fictionalized and chronological liberties serve the plot, not the historical record. Separating the fact from fiction is tricky—it requires laser precision, not a carving knife. In one example, Jesus is nude, painted in chocolate, surrounded by fruit, and then “served” at a private function.

“Something like this did happen but it was at a nightclub and there was no humiliation as there is in the book,” he said. “The German developer is everyone who was here. So much about South Beach was about models and beauty so I had to put models and designers in the book. How else do you describe a place without taking characters from the people who live there?”

Despite the sexual pathologies and eccentricities of his characters, Antoni says that stripped down (yes, there’s plenty of sex and nudity) his book is about family.

“All good stories are about families. My first book was about my family (Paradise Overdose, Grove Press, 1997) and this one is about a family that was thrown together by circumstance. That’s the way it was then. Old people taking care of young people with AIDS, drag queens living beside award-winning artists, wealthy people mixing with Cuban refugees.” 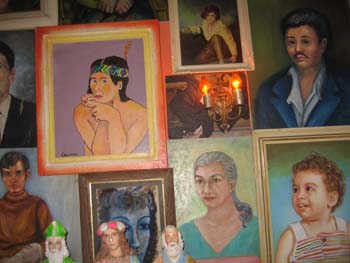 Fairy tale or family saga, the book and its author are hot thanks to favorable review in The New York Times.

“I suppose I’m being taken seriously. TheTimes review turned this book into a job. There are radio shows, interviews like this one, possibly a television show. I preferred it when I woke up and could do whatever I wanted to feed my creative soul.”

Antoni may not be used to the fast pace because it has been 13 years since his last book.

“I tell people who ask that I only wrote one word a day.”

He claims that South Beach: The Novel will be his last book. “Writing is lonely. I’d like to do something in design. Maybe I’ll design furniture. Something where there is collaboration.”

Whether he’ll keep writing, or whether his next creation will be South Beach: The Sofa is anyone’s guess. But there is this…something that happens when Antoni appears at local bookstores. “People actually read every name in the book’s acknowledgements. Inevitably, I’ve left someone out. So they come up to me and ask if I remember so and so. After a few clues, I do. Then I think, hmmm, I should have included that person. All those names in the book, they all have a story. Really…it’s another book.”

link to article on miamiartzine.com