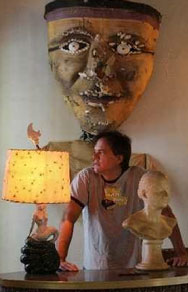 An Antoni writes what he knows

Almost 20 years ago Brian Antoni landed at Miami International on a flight from New York. He was on his way to the Bahamas, and when his connection to Freeport was canceled, he rented a car, drove across the bay and checked into the Leonard Beach Hotel at the south end of Ocean Drive.

”The rooms were themed, and, oddly enough, I got the AIDS room,” Antoni says. ”The walls were full of names of people who had died from AIDS. It was absurd. I went outside and started walking, looking at the sights.” The weedy sidewalks led him past retirees rocking glumly on the front porches of decrepit hotels, past palm trees, seedy bars, cheap-souvenir shops and boarded-up hulks not yet resurrected as Art Deco treasures. But the farther Antoni walked, he began to notice street performers, roller-bladers, gay couples and drag queens. Possibility floated on the breeze along with whiffs of Coppertone.

”I thought this place was entirely insane,” Antoni says. ”By the time I got to Lincoln Road, I knew I was staying.” He rented an apartment in South Pointe Towers and began the long, eccentric love affair with the neighborhood that forms the backdrop for South Beach: The Novel (Black Cat, $14 in paper), his flamboyantly sexy, marginally autobiographical, more-or-less fictional new litera-tour.

”I’m sick of these people coming here and thinking the Beach was always like this,” says Antoni, 48, strolling past the high-end boutiques and restaurants of Lincoln Road on a warm winter afternoon. “The book’s a love-hate story of South Beach and all it’s gone through. I wanted to slap it and kiss it at the same time.”

South Beach’s protagonist is Gabriel Tucker, a globe-trotting, 29-year-old trust-fund baby who suddenly finds himself homeless and broke, except for one dubious asset: the Venus de Milo Arms, a run-down, Ocean Drive apartment building inherited from his grandfather. Gabriel moves in and soon is rubbing elbows with its other residents: an elderly Holocaust survivor, a mute drag queen, a gay gossip columnist with a penchant for S&M, a chiseled Cuban supermodel and a performance artist. He quickly becomes enthralled with South Beach’s stereotypically bohemian preoccupations — drugs, art, murder, sex — and immersed in the allure of its prostitutes, crooked politicians and greedy real-estate developers.

Jennifer Rubell, cookbook author and longtime Antoni friend, says that when she read South Beach, “most of the characters popped out as a cross of two or more real people who were around back then. I never thought I would feel nostalgic about anything, but I felt incredibly nostalgic about that moment in South Beach when the old Jews were living in the hotels, when the drag queens were really the local celebrities, when everybody thought they knew the inside dirt on what the evil developers were doing.”

One of those blended characters is Skip Bowling, Antoni’s HIV-positive party/celeb columnist. Skip has two obsessions: abusing drugs and paying beautiful men to abuse him. Antoni based the character partly on Robert Levy, a young theatrical producer who was found strangled with a braided belt behind a Delray Beach men’s room in the 1990s. He also drew aspects of Bowling from his friend Tom Austin, a longtime freelance writer and former Miami New Times night-life columnist who witnessed and recorded South Beach’s transformation.

”The tone of my column was apocalyptic and bleak, and he took a similar tone in the book,” Austin says. “It was a looser time. It was the cusp of the rise of the champagne culture, which ruined everything.”

In South Beach, Italian designer Salvatore Fabrizio (Gianni Versace? Antoni won’t say) rules the night, a V.V.V.I.P. at clubs such as the old Warsaw Ballroom at 14th and Collins (now Jerry’s Famous Deli). Less well regarded is the rich German developer Heinz Lerman, who shares more than his European background with the controversial Thomas Kramer, the jet-setting multimillionaire developer who in the 1990s scooped up South Beach properties as if they were seashells.

”The thing about any moment in time is that the moment doesn’t exist unless it’s immortalized,” Rubell says. “For example, you can’t think of New York in the ’70s without thinking of a Woody Allen movie. Hopefully, Brian will immortalize that moment in South Beach.”

In some sense, keeping a particularly South Beach era alive has been the intention since Antoni started writing pieces of the novel.

”I had my eyes open, researching all those years,” he says, noting that the idea for the book began germinating shortly after he arrived in town. Out most nights, he found himself at clubs such as Liquid, which party pals Chris Paciello and Ingrid Casares opened at 14th and Washington in 1995, and hung out at the Strand and Carlyle on Ocean Drive. He worked at Fat Black Pussycat (“We didn’t let Charlie Sheen in once because he didn’t know the password”), Love Muscle on 23rd Street (he was bathroom attendant) and BASH on Washington near 10th. He traveled to Cuba through the Bahamas and came back with the fictional DNA for Jesus Mas Canosa, the South Beach Cuban refugee-turned-supermodel.

”Anything that opened back then, even if it was a drugstore, it was a huge happening, and everybody would be there for it,” says Debbie Ohanian, former owner of the Meet Me in Miami boutique (now a Starbucks at 12th and Washington) and the salsa club Starfish, now the Barton G. restaurant. “It was an amazing time, and Brian was there to see it.”

In fact, the scenario Antoni sketched out for Gabriel, South Beach’s protagonist, is in some ways a glance in the mirror. Antoni’s grandfather, a native of Trinidad, struck oil in Venezuela, happily ensuring that none of his descendants would have to work traditional jobs. When Brian was a few months old, his family moved to Freeport, where his father, Robert, was the first full-time doctor on Grand Bahama, even treating animals and performing plastic surgery. Not surprisingly, Robert Antoni’s Black and White clinic — the designer sheets on the operating tables held to the color scheme — became a social gathering spot. Brian attended Pine Crest School in Fort Lauderdale, earned a degree in history and political science from Emory and then law at Georgetown, passing the Florida Bar. He landed a job at the European Economic Commission in Brussels, working on development issues in Africa, but quickly quit once he realized he ”couldn’t save the world alone.” He wandered about Europe and Asia, ending up in the same cramped Tokyo hotel in which Gabriel Tucker languishes at the start of South Beach.

”Everyone thinks I’m lazy,” Antoni says. ”I have this reputation of being this child who just plays. I’m grateful every day for my grandfather and how hard he worked. It enabled both my siblings and me to be artists.” He admits that one reason he started writing — his 1994 first novel Paradise Overdose drew from his family’s life in the Bahamas — was to catch up with his accomplished siblings. Younger sister Janine is an admired conceptual artist with work in the permanent collection of New York’s Museum of Modern Art. Older brother Robert, who taught creative writing at the University of Miami, is an acclaimed writer whose Divina Trace won the Commonwealth Writers’ Prize for best first novel in 1992.

After Hurricane Andrew hit that same year, Antoni noticed a ”For Sail” sign outside an old, beat-up house at Euclid Avenue and 15th Street. He bought it for $260,000, fixed it up and named it Chateau Briand, after his favorite entree. It’s decorated with relics from the night clubs and hotels of yesterday’s South Beach, and a large wall is papered with press clippings featuring Antoni and his friends. The real Venus de Milo Arms, an eight-unit apartment building next door that Antoni rehabbed and rented to friends, came with the deal.

”Certain moments are encapsulated in a certain place, and everything about South Beach existed in that building more than anywhere else,” says Rubell, who arrived in 1993 after graduating from Harvard. “Brian was less of a landlord and more of a curator. It was the complete South Beach fantasy made into reality. Everybody from every road of life lived there.”

Recently at the Rubell Family Collection in Wynwood, her parents hosted Brian and his siblings as they talked about their work. Onstage, the trio giggled over old childhood stories. Janine’s art, projected on a screen, glowed as she spoke about ”narratives” and ”performance.” Robert read one of his folk-inspired stories in a Caribbean lilt. Brian read a steamy South Beach sex scene.

Antoni has dedicated his novel to Rubell, Ohanian, Austin and more than 1,350 other ”pioneers, dreamers, developers, drag queens, artists, celebrities, hustlers, grifters, models, promoters, characters, confidence men, snake oil salesmen and extraordinary people who came together at a very special time.” Rubell lasted for seven years on South Beach before moving to Manhattan. Ohanian now lives in Los Angeles. But Antoni, who has an apartment in New York’s West Village and also spends time in the Bahamas, has pretty much stayed.

Strolling down Lincoln Road just minutes from his house, he smiles as he catches glimpses of the past’s funky vibe: Mark Buckley riding a bike down the mall with Mr. Clucky the rooster on his handlebars and Mitchell ”Disco Mitch” Chonin in his trademark skirt, still twirling to ’70s hits for spare change from passersbys.

Even so, ”I miss the old people who have all died or gone away,” Antoni says. “I miss having no traffic on the street. South Beach has become The South Beach Diet, South Beach soda, South Beach furniture. It’s funny that we’re sort of the brand of hipness now that we’re not truly hip anymore.”