Novelist and Miami Beach literary darling Brian Antoni moved to South Beach from the Bahamas 20 years ago, which is just about the time his new book, South Beach: The Novel, begins. This Xrated roman à clef is a phantasmagoric paean to the golden age of South Beach. Much of it takes place in a rundown apartment building on Ocean Drive called the Venus De Milo Arms, and its ensemble cast includes the hunky Gabriel Tucker, who inherits the dowdy building along with its family of kooky tenants; Miss Levy, an elderly Holocaust survivor who is secretly a bookie; Marina, a performance artist who pulls a ribbon from her vagina inscribed with the names of people who died of AIDS on South Beach; and Jesus, a young Cuban refugee who washes up on Ocean Drive on a raft and becomes a model and paramour of a famous Italian designer. Recently, Radar caught up with Antoni to talk about and his sex-filled tome, the death of Versace, and how the South Beach of today compares to the gay ’90s. 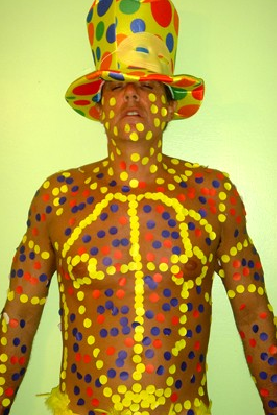 RADAR: What was so different about South Beach in the ’90s?
It was like London was in the ’60s. There were a brief few years when all the creativity and beauty and wealth came together and South Beach exploded. The kind of relationships that were formed at the fictional Venus De Milo Arms were taking place in every single building in South Beach. Gays, straights, artists, old people, eccentrics—everyone felt like they were part of something. People made families and took care of each other. It was before South Beach became a brand name—the South Beach diet, South Beach soda, South Beach butt plugs.

Speaking of butt plugs, there’s an awful lot of sex in your book. Is there still that much sex in South Beach?
Absolutely. South Beach is driven by sex. It was a chain of lust that lead to the creation of South Beach. All those gorgeous models who come here are chum. Also, I find sex relaxing, and I find that it’s a good way to end a chapter.

Reading your book, it occurred to me that back then everybody was for sale in South Beach.
We’re for sale right now at a whole other level. Now we’re for sale to the biggest developers and chain stores. It’s a different level of prostitution. Back then there were parties for the fun of parties; now there are only parties to sell something. Back then there was art for the fun of art; now there’s Art Basel.

Are drugs still as prevalent as they are in the book?
Everybody is popping Ecstasy. Drugs aren’t more prevalent here than anywhere else, although the drug Ecstasy was always a South Beach favorite. It’s a love drug, and it’s the perfect drug for South Beach because it made everyone closer, at least till it wore off. But Ecstasy made men impotent, so they combined Ecstasy with Viagra and they called it “hammerheading.”

Two of your characters have their ashes dumped in the pool surrounding the Holocaust memorial in Miami Beach. One was a Holocaust survivor and another was a victim of the AIDS.
I tried to make parallels in the book between the Holocaust and AIDS. You could see those parallels here in South Beach—people leading a normal life and then getting a death sentence. I think that’s why these older Jewish survivors related so well with these young kids and took care of them when they got sick. When you think you’re going to die tomorrow, it’s like an explosion of life before the darkness. A lot of gay men died here in South Beach in the ’90s.

The character Skip Bowling in your book is a nightlife columnist with a masochistic streak who arranges his own murder on the beach.
I think all gossip columnist are masochistic. Gossip columnists will even tell you that. The story in the book is based on a young guy who was a nightclub promoter here and was actually killed on the beach. He was a beautiful, sweet guy; you would never expect he was leading this double life as a masochist.

Is Jesus, the Cuban man who is discovered by Italian fashion designer Fabrizio, based on a real person?
Clearly, I took that story from Versace, because you couldn’t make that story up. I remember looking at the window of the Versace boutique at 4:00 one morning and in it was a blowup of a gilded raft with beautiful models, and it dawned on me that every day these rafts were washing ashore in front of Versace’s house. The character of Jesus was based on every young Cuban guy who tried to make it here.

When Versace and Madonna and Sly Stallone moved here, it was the beginning of the end of the golden years. You’d see Versace in the middle of the night, walking around. It’s not like it is now, with limousines and bodyguards. When Versace was shot, the whole place changed. It was like when Adam ate the apple. Versace was living off the same energy that we all were, and when he died the innocence was shot.

What’s your assessment of South Beach today?
I think it’s still a great place. We still have amazing architecture and climate, and I can walk to 50 clubs and hundreds of restaurants from my front door. We have some wonderful event almost every weekend—a food and wine festival, a boat show, Art Basel. It’s still a carnival, otherwise I wouldn’t be here. I demand that my life be theater. I get really bored easily.